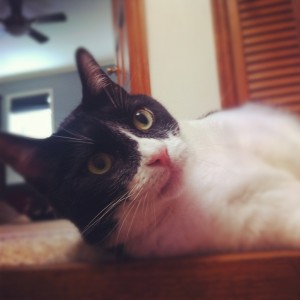 Simon Lemon-Limen Hamer aka Simon- black and white short hair cat, 9 years old, weights between 16-18 pounds, has a “hockey” stick, squeaks like a mouse, is a shower licker, BFF was Tommy Leroy Brown Hamer (may he rest in peace), loves to climb on mom at ….loves to climb on mom. Simon is also know as Chunky Monkey and Chunk-a- Monk. 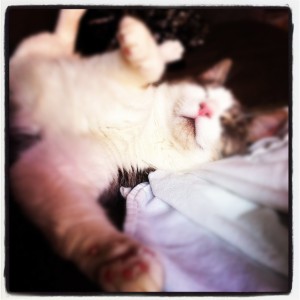 Pandora (refuses to disclose middle name) Hamer aka Panny- gray and white tabby cat, 3 years old, had one child named Remus who she gave $25 and a bus ticket to once he was weened, likes to lick out of the toilet and shower (passed the habit on the Simon), enjoys smelling moms breath at night, likes to sleep in the middle of the bed and refuses to move, snores, loves to show off her gorgeous white, fluffy belly (her words), is also none as Porky Pancetta. 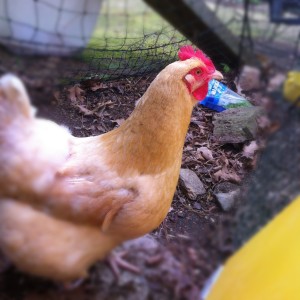 Turbo- yellow hen, head hen, lays the largest eggs, is a jumper, loves dried mealy worms (“They are my crack”-her words), once survived an attack from a dog by playing “dead chicken”. 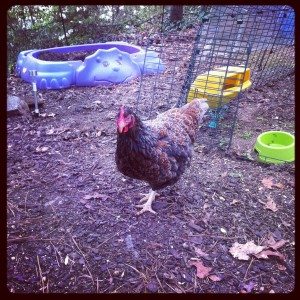 Poppy- brown and grayish blue hen, only has one wing (like I didn’t plan that!), goes broody about two times a year, lays brown eggs. Update 9.7.2014- Poppy has gone to the big chicken in the sky. RIP Poppy. 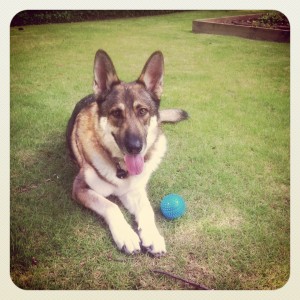 Timber Wolf- He is the newest member of the family. He is a 5-year-old German Shepard and the sweetest dog EVER! Likes include his ball, Panny, Phil (his stuffed animal) car rides, dog runs and going to work with mom. 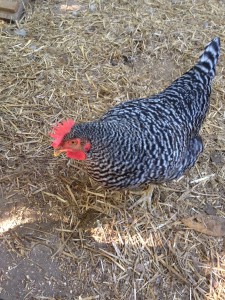 Zazzles- Black and White. . She is Zazzy! Has a nice big red cone. Lays small brownish eggs. Likes to announce to the coop when and egg is coming! Loves to roost with her sister Terry Pete. She doesn’t mind being held and likes to have under her chin rubbed. 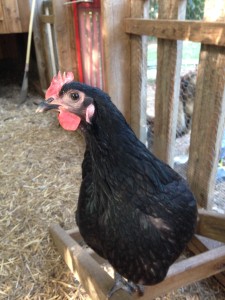 Terrance Peterson aka Terry Pete- Black feathers that look green when the sun shines on them. Loves to roost and doesn’t mind being held. Lays small eggs with a tint of pink. Has a smaller cone then her sister Zazzles and couldn’t care less.

One thought on “The Occupants of Hotel Yorba”