I have had a lot of people ask if there really is a Hotel Yorba? Yes there is! 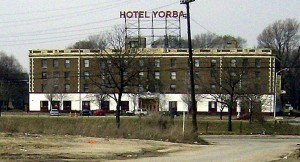 Hotel Yorba was Built in 1926, the Hotel Yorba is a former hotel in southwest Detroit that can be seen along I-75 near the Ambassador Bridge to Canada. The single version of the song was recorded in room 206 of the building which is now used as government subsidized housing.—fond on whikipeia

The Hotel was made famous by the Detroit rock duo The White Stripes who recored the song Hotel Yorba.

The White Stripes shot much of the song’s music video outside the hotel, but were denied permission to film inside; according to Jack White, the duo is “sort of banned for life” from the hotel.[2]The song was used for a deleted scene in the 2002 movie 28 Days Later. The scene does not appear on the DVD, while the song itself is featured on the soundtrack CD released by XL Records.The single was reissued on opaque red vinyl for Black Friday Record Store Day in 2012 by Third Man Records and later released on standard black vinyl..—fond on whikipeia

So what the hell does that have to do with me and my blog? Back when My Man and I were first dating, he took me to Detroit, which is where he is was from. I met the parents but most importantly, we spent time with his best friend and his lady-love (who now is his wife). One of the may things we did while on the trip was go to this club The Magic Stick, which is located above a bowling alley. Adam, My Man’s BF, wanted us to see this rock/blues duo that had been making some waves in Detroit.

I remember that the opening band where these guys dressed up as astronauts.  I was not impressed. AT ALL. The band, The White Stripes, came on and I remember them being pretty good, kinda raw and loud. Even back than Jack could play a mean guitar.

This was the first concert that My Man and I went to see together. They played Hotel Yorba at the show and we really liked it. It is a fast passed tune that can get stuck in your head for days.

About a year later, The White Stripes hit the mainstream rock/indie music stream and the rest is history. What I would give to have that little crappy poster from that show.

My Man and I became big fans of Jack White and his many bands and solo endeavors. We have seen him with  The White Stripes, a few times with The Racontuers and twice as a solo artist. But it is that first show and that song that we always go back too. When we moved to our current home we decided that it was our own little Hotel Yorba (a much nicer version) and named it as such. Since then we have been given Hotel Yorba towels and a door mat and we have key chains to give to our guests when they stay with us. 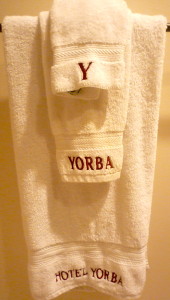 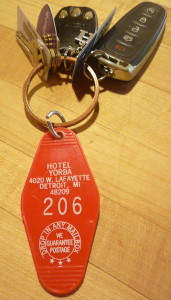 And that is the story of MYHOTELYORBA.

5 thoughts on “Is There a Hotel Yorba?”