Yesterday was my first radiation treatment and I am happy to say all went well. Well, for me that is. Turns out I had company with me yesterday. I got a call from the school around 8:30am from the school nurse saying The Boy had a headache. As many of you are aware, the school nurse can’t give a child any kind of medication. So I threw some clothes on, put on a hat, grabbed some Tylenol and Timber and headed to the school. By the time I got there, he was already back in his classroom. The nurse called him down and I gave him the medication. He said his head hurt really bad and that he wanted to come home. I told him I had to go the hospital and that he would have to come and that there would be no TV or iTouch. He said he didn’t care. I wasn’t in the mood to argue and to be honest he did look pitiful. 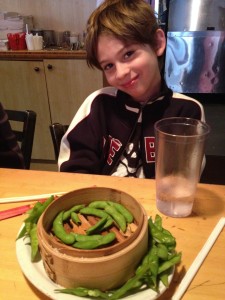 To make a long story short, after a couple of hours of sleep, The Boy seemed fine. We went and grabbed lunch at Doc. Chey’s which is by the hospital. He was perfect in the waiting room asking me all kinds of questions about the treatments. All the RN’s fell in love with him and he read his book without being told too. He wasn’t allowed in the room during the actual treatment but sat right out side of the room.

I was felt up by 3 women! Woot! One thing you will have to get use to while going under treatment for cancer, is that strangers are going to see most of if not all of you, butt ass naked. Yep. Naked. Wonderful. Just when you feel at your best! NOT.  Anyway, my ladies were really cool and even asked me what kind of music I wanted to listen to while they zapped me. The Black Keys were Tuesdays featured artist. The whole thing took about 20min. I think today’s will only take about 10min and I am going to ask for The Avett Brothers.

After we left and got home, the boy did his homework and went to play on his iTouch (I caved). We were planning on meeting his dad at Home Depot to get our Christmas Tree but when I went up to get him, I found him passed out. I took his temp and it was 101! What? What? The Boy was sick! He had a temp all night and complained about his head and tummy. When I took his temp this morning it was 99.5. I told him to go back to sleep. My Man will be staying home with him today while I head to treatment.

I am told it will take a week or two to notice some of the side effects of the radiation. The two I have been told about is fatigue and burning of the skin where they zap me. The burn should fade a few weeks after treatment is over.

It has been rainy here in the ATL for the past few days. The Girls are not liking it at all. I hope that the sun comes out soon! How about where you are? Sun? Snow? Rain?

3 thoughts on “I survived!”