The Boy and The Man in Red

On Thursday we braved the rainy weather and went to get our Christmas Tree. We have been going to Home Depot for years to get our tree. They have a large amount to choose from and the prices are great. They were having an event when we got there. The Boy got to visit with Santa, pick a prize out, won a Home Depot football, an Atlanta Aquarium key chain, had a bag of popcorn and some hot coco. The best part was that since we bought a tree and no one was there (crappy weather), we got four free tickets to the Aquarium! That is almost a $200 value! Far more than the tree ended up costing. Sweet. 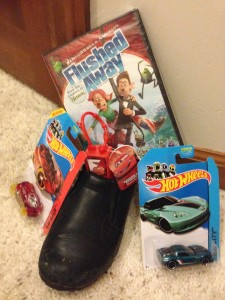 On Friday the machine that administrates my radiation was having issues. I ended up waiting 45 minutes before I got finally got zapped. The wait wasn’t so bad. They had a volunteer with a cart of snacks and water for us. The day before I walked in and saw two dogs in the waiting room. My first thought was “We can bring our dogs? Sweet!” Yeah, no. These we’re working dogs. I got to meet Bijou who is a Bichon Frise. He was very cute and sat next to me while I petted him. His owner said they go all over Atlanta visiting people and come to Emory once a month.

This week we have gotten lots of yummy wine! Six bottles from Big Table Farm and three from Iron Horse!

On Friday night, The Boy went to a Gingerbread House party. The party was at his friend’s house. His mom told me they had three grades represented: 3rd, 5th and 6th. She has 3 boys (bless her heart!) and this was the third year of having the party. When I picked him up, the boys were watching Duck Dynasty and my boy was eating a tube of icing. Nice.

I slept in till about 8:45am on Saturday and it was wonderful. I am already feeling the effects of the radiation. I have been so tired and feeling just plain out of it. Sleeping in and having a day off from the radiation has made all the difference. I even went to workout with SK today! My left knee was killing me and I am weak on my right side but I think I did ok. I have a lot of work ahead of me to get back to where I was in June. But I am ready! I am going to head back to the gym tomorrow to do some cardio.

The Boy hard at work. 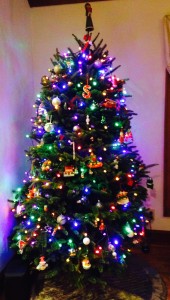 When I got home it was time to decorate the tree and watch some football. My team lost last week in an epic game against Auburn. If you saw the game you know what I mean. That being said, I really wanted Auburn to when the SEC Championship and they did. Now, my second favorite team, Michigan State, is playing and I want them to win for two reasons. I want them to beat Ohio State and if they do then Auburn goes to the BCS Championship game. I would LOVE FSU to lose cause if that happen, then Alabama would also go! But that isn’t going to happen. However Auburn must go and win the whole damn thing. See, the state of Alabama doesn’t have that much going for it. If it weren’t for Mississippi and Louisiana it would be ranked last in almost everything. But if Auburn could go and win the championship, then a team from Alabama would have won the last 5 National Championships! Auburn, Alabama, Alabama, Alabama, Auburn. Now you understand Reader’s! Cross them fingers! GO MSU!!! Sparty is the MAN!