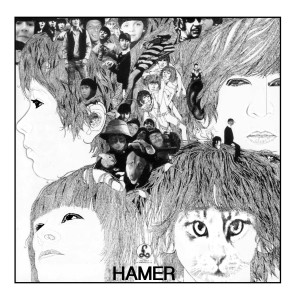 Do you send Christmas/Holiday Cards? When The Boy was first born, all the Christmas Cards we sent were a super cute picture of The Boy (taken by me :)). But three years ago My Man and I finally decided it was time to make the Christmas card an event. As some of you know, we are really into music. Our idea was to recreate famous album covers (remember those)? The first year was probably the best one we ever did. 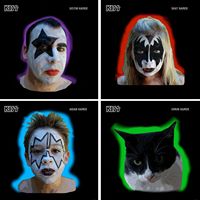 How awesome is that?! Doing the make up was so much fun and Simon was perfect.

In 2012 both of the cats were able to be featured. The actual photo’s of us were not that flattering but worked perfect for the cover and really, that is what it is all about. I love the cat paws!

This year it was Panny’s turn to be featured and she was in place of George Harrison. (BTW-The cover is The Beatles- Revolver) I think she looks great. Aidan as Paul McCarthy is the best!! His picture was perfect. Simon, Timber, Poppy and Turbo were also in the card. We then added a handful of pictures of our friends and their kids. The actual part of putting the card together was a bit time-consuming but fun. We are very happy with how it turned out. We have already picked out next years cover. My Man thinks only two people will actually know the album and he is ok with that since he said those two are his target audience anyway (consider yourself lucky Kosky and Havel).

Do you put much thought in your holiday cards? Do you take a picture for it?