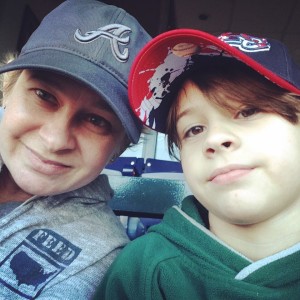 Happy Friday Readers! Are you not so happy that it is Friday? I am. It has been a roller coaster of a week. Between chemo, how I am feeling, homework, tests, The Boy’s feelings and the crying that I am ready to chill out. Oh the crying! I am drained Readers. Drained. It has been an emotional week for the The Boy and I. Yesterday he admitted to me that sometimes he was angry/mad at me for being sick and that is why he lashes out at me. What do you say to that? Well, I had and idea what to say thanks to my conversation with my friend Judi R. on Wednesday. 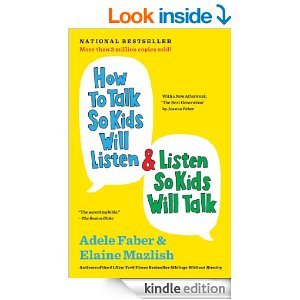 She told me about a book called How to Talk So Kids Will Listen & Listen So Kids Will Talk and suggested the I take a look at it. Well, I am glad I did. I downloaded a sample and what I was able to read was perfect in helping me reply to his comment. I told him that I too was mad and angry at myself. That I don’t understand why tis was happening to me and if there was anything I could have done to stop or fix it. I told him I too got scared, sad, angry, upset, felt guilty and that it was all ok. It was normal to feel that way and he had every reason to. We sat up at the chicken coop/fire pit area and just talked about how we were both feeling. There were tears and hugs and questions and listening. But the thing is, even how great it was to have this conversation with him was (and I think it helped), I should not be having this conversation with my 9-year-old son.

Follows the story of Claire Randall, a married combat nurse from 1945 who is mysteriously swept back in time to 1743, where she is immediately thrown into an unknown world where her life is threatened. When she is forced to marry Jamie Fraser, a chivalrous and romantic young Scottish warrior, a passionate relationship is ignited that tears Claire’s heart between two vastly different men in two irreconcilable lives.

I have been aware of the Outlander series of books for a while now and to be honest, was not interested in reading them. A few months ago I started seeing ads on TV but I have never really watched anything on Starz (did I even get the channel). Well about a week ago my friend Heidi A. suggested I take a look at the first episode that they were showing for free. I had the time and thought what the heck, I would give it a try. Well, turns out that I do get Starz and I was hooked! It is a pretty good show. Now, I have heard from two people who have read the first book (which the first series is based on) that the show is better than the book. When does that ever happen?! Have any of you read the books? Are you watching the show? What do you think?

Pro’s- The setting is beautiful. The accents are beautiful. The story is very interesting, not to hooky yet. Strong female character, I like Claire. She is tough and stand up for herself. I do wonder if she is a little to strong since she is not from 2014 but from 1945 when woman still were expected to act a certain way. There are some very nice looking men, Jaime, one of the male leads is nice to watch.

Con’s- The accents are hard to understand. For some reason I think if I turn the volume up louder, it will help but it doesn’t. My friend Heidi watches some of the shows over again to try to catch things she missed the first time around. In fact she thought one of the leads accent was a bit over the top only to learn he really is from Scotland. There are some really ugly, dirty, bad teeth looking people in the show. It was a dirty, smelly time. The last episode was 1/2 in Gaelic. That was hard because I don’t speak that. What the hell is going on?

The show airs on Saturday but if you have the On Demand feature (OMG, I love it! I know kinda late to the game) you can catch up pretty quickly. That is what I did after watching the first show. Heidi and I think they are going to air two more shows and then take a break and play the rest in 2015. I hate when they split the season up like that. I am hooked, you don’t need to try to hook me! Just make more shows!

I am reading three books right now. A Year Without Sugar, How to Talk so Kids Will Listen & Listen So Kids Will Talk and The King’s Curse. As I have shared before I also listen to audio books via Audible.com. I haven’t been listening to anything for awhile and have 5 credits and a $10 coupon to use. My Man and I are big Agatha Christie fans, we watch all the shows on PBS when they come on. Years ago I read all of her Miss Marple books and have decided that I will listen/read all of her Hercule Poirot books. The first one is The Mysterious Affair at Styles.

Plans for the weekend Readers? None here and I am good with that. Well, maybe some cleaning. I would love to go through out glasses, coffee cups, mugs, wine glasses and clean it up some. The cabinet is full!! I hope whatever it is you end up doing you have fun!