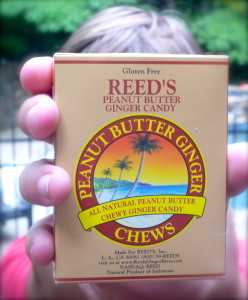 When I heard I was going to have most likely have to undergo chemo, I did some reading and read what most people do. That I will get super bad nausea and that ginger is great at easing it. So, when one of my nieces suggested I buy some ginger candy while we were at Trader Joe’s. I thought what the heck! I eat ginger when I eat sushi and have cooked with it many times. Well, I had to throw out that piece of ginger candy before I had even had half of it.

So gross and it burned people! It burned!! Thing is, My Nieces and The Boy couldn’t get enough of the stuff. Guess I was too old for it.

Fast forward 2 weeks. I now have a ton of ginger items. I have ginger pills, which I take and that may or may not be helping. See, I am also taking medication for the nausea so who knows what it doing what. I also have some sugared ginger candy that I like. I like the sugar and I like how the ginger fire (much milder than the TJ’s) stays with me for a while. But I can eat a piece or two of it a day. The Boy loves that stuff too. I also have some ginger tea and ginger cookies which are yummy but I can’t be eating cookies all day.

Then one day this week I got a care package from my gal Jaime G. In it was a cool T-Shirt from her band The Mudbugs, some lavender oil and two boxes of ginger candy. More ginger! One of them was the regular kind of candy and the other was Reed’s Peanut Butter Ginger Candy.

First reaction= GROSS! Why would you screw with peanut butter like that?!? Now I love me some peanut butter and have been on a peanut butter kick for a while now. I just could not see why you would ever, ever want mix the two. I called The Boy in and asked him if he wanted to try a piece with me. I told him it was candy and since he is an 8-year-old, he said Ok!

OMG! It was really good! Chewy but not two much. At first you taste the peanut butter flavor and as you continue to chew the ginger “fire” starts coming through. It is not over powerful and though the ginger “fire” stays with you, it is only for a few minutes and won’t ruin your palate for any other foods or drinks you may want. Only bummer is that there is only like 9 pieces in a box and well I had to share with My Man too. Total buzz kill.

If you know anyone who likes ginger candy or is going through chemo, send them some. It’s Yummy! And I like that the box looks like a deck of playing cards! Thanks again Jaime!!